Dr. Bakeer, born in New York and raised in New Orleans, says the move to northeast Louisiana has been an easy one. 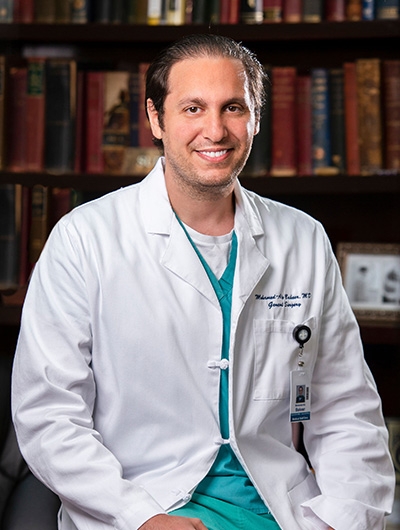 "Everyone is welcoming and so nice," Dr. Bakeer said. "It has not been a tough adjustment, even though Monroe and New Orleans are quite different. I’ve enjoyed a very welcoming community, which has made the transition a lot easier."

Medicine and science are ingrained in Dr. Bakeer’s family tree. His grandfather, a medical doctor in Egypt, was the first deputy to the minister of health. He also founded and directed Egypt's national labs for vaccines and serum. Dr. Bakeer's grandmother, also a medical doctor, worked in the same lab.

Dr. Bakeer's mother, a microbiology professor at LSU Health and Sciences Center, and his father, an independent engineer, work in New Orleans.

Solving technical problems has always interested Dr. Bakeer. When he was a child, he built models of cars. Following his father's footsteps, he pursued engineering; he received a B.S. in biomedical engineering and an M.S. in neuroscience from Tulane University in New Orleans. During that time, he also worked for the Army Corps of Engineers in New Orleans. However, his love for medicine remained.

"I studied bioengineering, but I knew I was still interested in medicine. Engineers solve problems, and I realized that the engineering skillset could translate to medicine. As a surgeon, you discover a problem, and you definitively fix it," Dr. Bakeer said.

He is a member of the Society of Laparoscopic Surgeons, the American College of Surgeons, and the American Medical Association. Dr. Bakeer enjoys spending time with his fiancée, Monroe native Ellie Jackson, traveling, and playing basketball in his free time.

He is impressed with the Surgery Clinic of Northeast Louisiana, home of Delta Vein Care. "The breadth of surgery offered at this clinic is extremely impressive," he said.

"We are thrilled to welcome Dr. Bakeer to the Surgery Clinic of Northeast Louisiana," Dr. Sartor said. "He’s an impressive surgeon who shares the vision and values of our expanding practice. Dr. Bakeer will be a great asset, as his incredible work ethic, intelligence, and passion for patient care broadens our ability to care for the community."